The MSR division of KELLER HCW is celebrating its 50th anniversary!

The MSR division of KELLER HCW is celebrating its 50th anniversary! 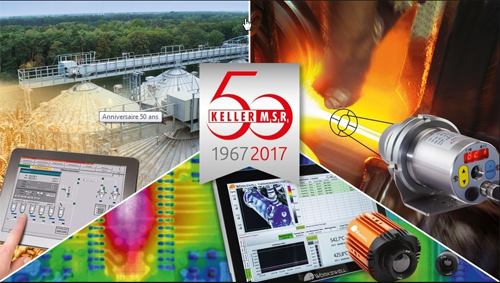 The MSR division of KELLER HCW (Groupe Legris Industries) is celebrating its 50th anniversary this year and wishes to thank its customers and partners for this long and encouraging cooperation.

The origins of the company KELLER HCW go back to the end of the 19th century when the Laggenbeck machine operator Carl Keller (1847-1932) developed the finger car for brickworks. Further pioneering inventions of Carl Keller followed and laid the foundation for today’s globally acting company. The name KELLER is firmly established in the heavy clay industry and demonstrates innovation and quality. Today, KELLER HCW GmbH is a division of the French Groupe Legris Industries.

Founded in 1954, its sister firm KELLER Spezialtechnik developed and manufactured control and measuring technology for dryers and, in 1967, it acquired a majority of the shares of the Pyro-Werk in Hanover, a company that had been producing pyrometers for non-contact temperature measurements since 1925. The administrative departments and the workshop were transferred to Laggenbeck in 1971. In 1977, KELLER Spezialtechnik and Pyro-Werk first merged to KELLER Spezialtechnik-Pyro Werk GmbH and in 1990 it became the business unit MSR of the KELLER GmbH.

In addition to the systematic development and the worldwide sale of pyrometers, the business unit MSR also established its own automation department. The focus of this department lies on control system for grain mills and compound feed plants, but also on control systems for a large variety of other plants in the bulk materials industry.