In 2018, Groupe Legris Industries achieved major milestones in our strategy of growth and redeployment, building on the work done in 2017 to consolidate business across the same scope of operations.

As part of a broader reconfiguration of the company’s family-owned structure, Supervisory Board chairman Pierre-Yves Legris chose Arkéa Capital as a partner for the Group’s growth strategy. In late 2018, Arkéa Capital Partenaire thus took an equity interest in the Legris family holding company, which owns nearly 70% of Groupe Legris Industries. Members of the Legris Industries management team also became shareholders.

We will use this investment to step up growth and diversification by acquiring new industrial companies and continuing to drive organic growth in our existing businesses. Our target is to increase sales to €500 million over the next five years. We also plan to move Group headquarters from Brussels back to Rennes—our historic home and the site of most of our corporate services—in the course of 2019. We will maintain our office in Brussels, where cash management operations are based.

At Clextral, business held steady in 2018, with new orders down 2% and sales down 1% from 2017. While sales grew a solid 7% in Asia, they surged 66% in Eastern Europe and tripled in Sub-Saharan Africa, albeit from a low level. By contrast, business slowed in France, and to a lesser extent in the Middle East.

At Keller, sales were down 7% from 2017, with major projects in Saudi Arabia winding down as expected. Those projects accounted for nearly all of the change, though Eastern Europe declined as well. Together, these developments outweighed growth across all of Keller’s other regions. But the most significant development was new orders, which totaled nearly €93 million in 2018, boosting the Division’s order book to €44 million and giving it a critical advantage for 2019.

After a steep 39% rise in 2017, Schiederwerk consolidated operations in 2018 with sales of €39 million, up 3% over 2017. The main driver continued to be power supplies for lighting systems in sports arenas, notably in North America, which still account for most of its business. After winning a major two-year contract in 2017, Schiederwerk booked enough orders in 2018 to head into 2019 with a strong order book. In fact, this was nearly on a par with the previous year, which saw a wave of early orders in an effort to offset longer delivery times for electrical components.

Just three years ago, Groupe Legris Industries was focused primarily on engineering, but we have now begun to transform our business by selling two engineering companies: Retrotech in early 2016 and Savoye in October 2018). We also acquired Schiederwerk, a specialized mid-size business with major growth potential, in May 2016.

The sale of our Savoye Division had a significant impact on our financial statements in financial year 2018: under IFRS rules, the change in scope of consolidation put sales at €165 million, down from €234 million when Savoye’s business is included through completion of the sale on October 31, 2018. Although sales volume declined a slight 3% at constant scope of consolidation, operating profit rose to €10.1 million—6.1% of consolidated sales—(5.9% in 2017), setting EBITDA at €13.5 million (8.2% of sales). In another major result of the acquisition, shareholder equity improved significantly between 2017 and 2018, rising from €45 million to €75 million. This change puts net debt at €18 million, positioning us to pursue our growth and redeployment strategy by acquiring new businesses. 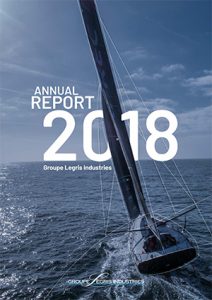 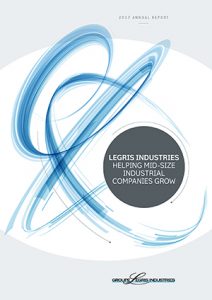 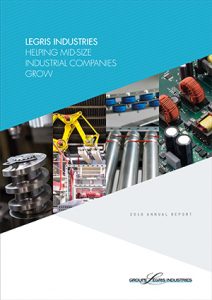 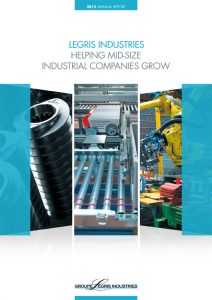 Legris Industries is managed by an Executive Board, under the supervision of a Supervisory Board.